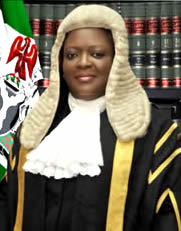 Honourable Justice
Faustina Iyabode Kola-Olalere
Hon. Justice Kola-Olalere was appointed a Judge of the National Industrial Court in 2008. She obtained her LL.B at University of Jos, Jos, and her BL at the Nigerian Law School, Lagos, Nigeria in July 1985. In her over 30 years of legal practice, she has variously served the Kwara State Government and the State judiciary in the ministry of Local Government and Community Development; Court Registrar; Magistrate of various grades who rose through the ranks, up to the Chief Magistrate cadre; from where she rose to the bench of the National Industrial Court of Nigeria. His Lordship is the Presiding Judge of the Port Harcourt Judicial Division of the Court.
Download Case Filing Form