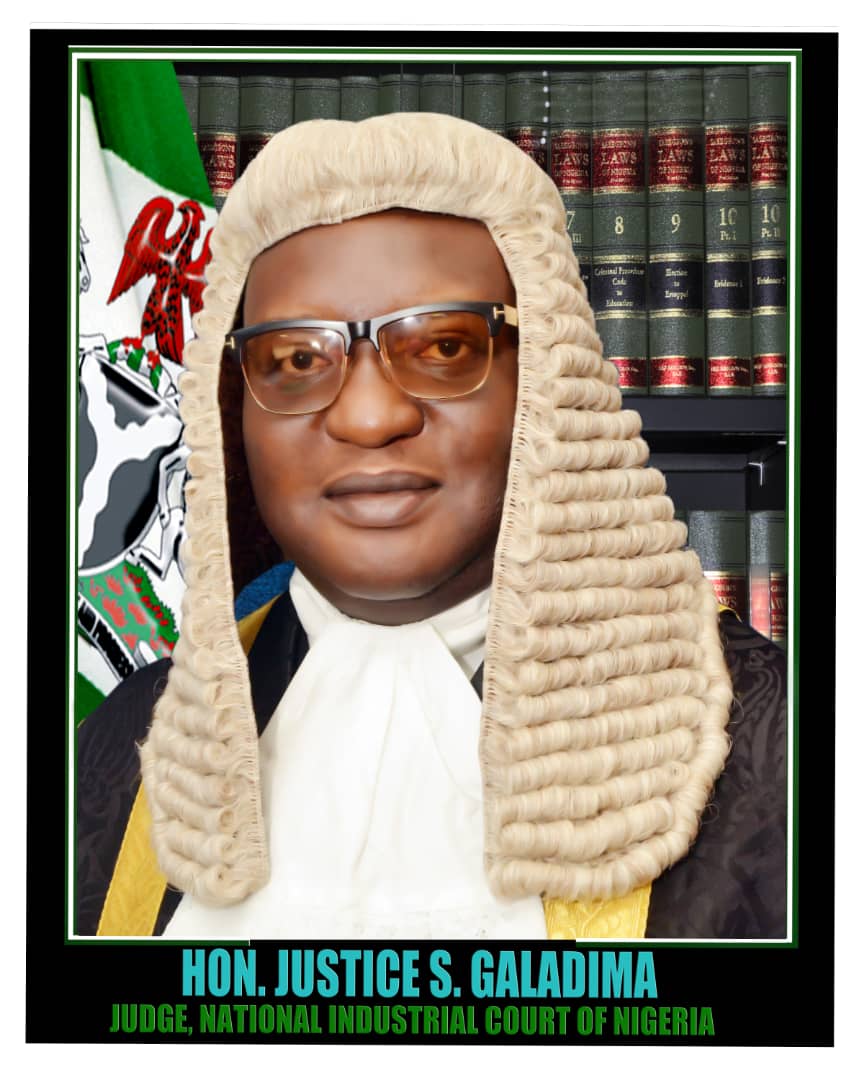 Honourable Justice
Ibrahim Suleiman Galadima
Hon. Justice Ibrahim Suleiman Galadima was born on the 24th of September, 1974 in Lagos State, Nigeria to his parents who both hail from Shafan Abakpa (Sofiyo) District in Toto Local Government of Nasarawa State. He spent most of his nursery school years in Jos, Plateau State, and eventually attended the University of Jos Primary School until his graduation in 1985. He thereafter gained admittance into St. Joseph's College in Vom, Plateau State from 1985 - 1991 wherefrom he completed and earned his Senior Secondary School Certificate. He almost immediately went on to study Law at the University of Jos, completing in 1997 and subsequently attended the Nigeria Law School in Bwari, Abuja between 1998/99, graduating as one of the best in his class and thus called to the Nigeria Bar. He was deployed to Calabar, Cross River State for his youth service and had initially been posted to serve directly under the then Attorney General and Commissioner for Justice, Mrs. Nella Andem Ewa (now SAN). He was however moved to the Calabar Branch of the Central Bank of Nigeria (CBN), from where he concluded his service. Upon completion of his service year in the year 2000, he moved to Lagos State and was employed as a pupil counsel by Messrs Rickey Tarfa (SAN) and Company. Almost a year later, he moved to Jos, Plateau State and joined Mr. Pius Akubo (SAN) as a counsel. He later decided to establish his law firm, Galadima and Company from 2002/03. He however, caught the attention of the then Chief Judge of Nasarawa State, Justice Ahmed Ubangari, who invited him to be appointed as a Magistrate in Nasarawa State and so from 2003, Justice Galadima began his long career with the lower bench in his home State. He rose from Magistrate Grade 1 to Chief Magistrate and in 2014, was appointed the first Deputy Chief Registrar for Probate by Justice Suleiman Umaru Dikko, CJ., which position he held immediately before his current elevation as a Judge of the National Industrial Court on the 14th of July, 2017. During his time as a Magistrate in Nasarawa State, he had amongst other things, published a book, The Nigerian Tenancy and Lease Law (2008); held the position of Chairman of the Magistrates' Association of Nigeria (2010 - 2013); become member of the Professor Gye-Wado led committee for the Revision, Compilation and Documentation of the Nasarawa State Laws (2012/13); been Chairman of the Nasarawa State Local Government Elections Petitions Tribunal (2013/14). He is a member of the Nigeria Bar Association. He is also a registered member of the Institute of Chartered Mediators and Conciliators (ICMC). As member of the Commonwealth Magistrates and Judges Association (CMJA), he attended the Annual Conference in Kampala, Uganda in 2012. He has travelled to places like Saudi Arabia, Egypt, and Dubai. Justice Galadima has five siblings and is married with three children. He loves farming and particularly horticulture. He is the first son of the Hon. Justice Suleiman Galadima, JSC, CFR (Rtd.) His Lordship is in the Owerri Judicial Division of the National Industrial Court of Nigeria.
Download Case Filing Form