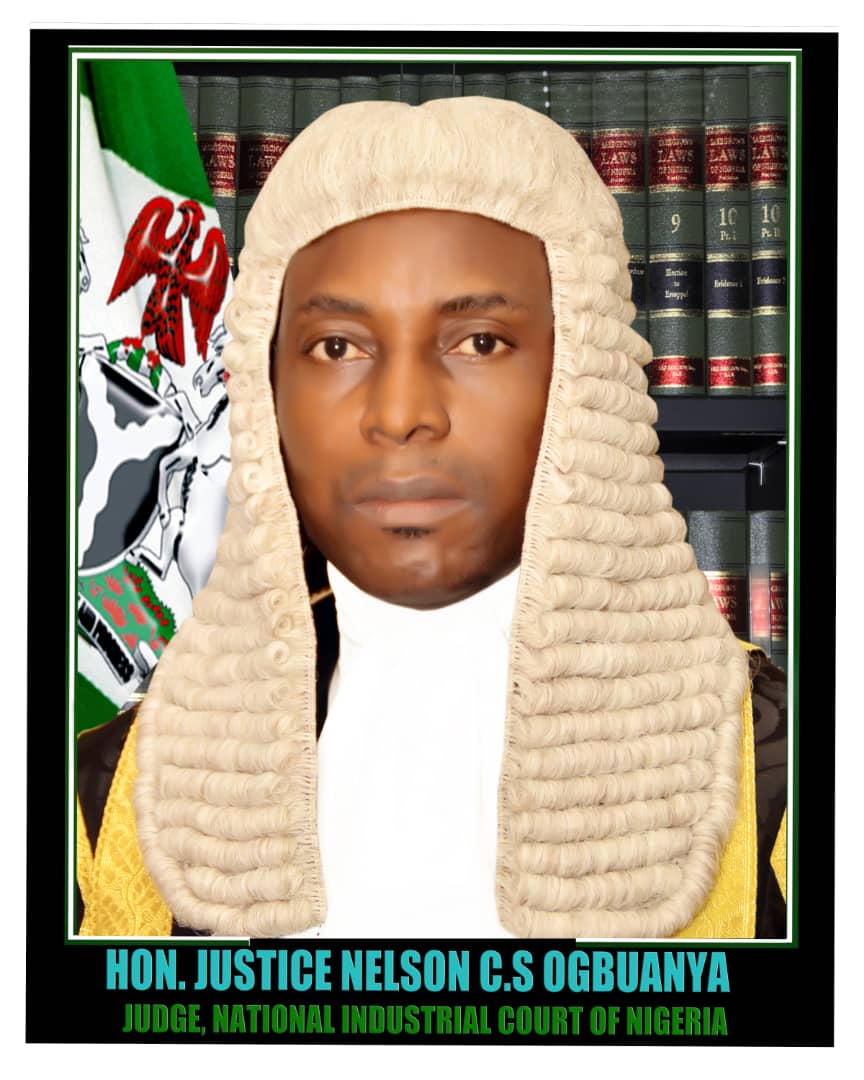 Honourable Justice
Nelson Chukwudi Stevens OGBUANYA
Hon. Justice Nelson Chukwudi Stevens OGBUANYA, prior to his appointment as a Judge of the National Industrial Court of Nigeria in July 2017, was a Senior Lecturer with the Nigerian Law School, where he has been teaching Corporate Law Practice and Professional Ethics & Skills (ICT, Arbitration & ADR Practice) in Lagos Campus since September 2005, and until his elevation to the Bench, he was the Head of Department of Corporate Law Practice at the Yola Campus (2015-2017). Justice N.C.S Ogbuanya attended the Nigerian Law School, Lagos (1997) and was called to the Nigerian Bar in February 1998. He holds Bachelor of Laws, LL.B (Hons) of the University of Nigeria Nsukka (1996), Master of Laws (LL.M) from the University of Lagos (2000) and Post-Graduate Diploma in Education (PGDEd.) from the University of Lagos (2008). He was admitted as a Member of the Chartered Institute of Arbitrators (MCIArb.), London (2000) and the Chartered Institute of Taxation of Nigeria (ACTI) (2011). He started his legal career from his National Youth Service Corps (NYSC) with the Law Firm of Udo Udoma & Belo-Osagie, and spent 7 years in active private practice and 12 years in combined academics and practice. In the course of a distinguished practical and academic career, he has been involved in consulting, teaching, researching and handling various aspects of corporate and commercial transactions/litigation, industrial & labour relations practice, as well as Arbitration & ADR matters. He also worked as a Local Partner/Consultant (Nigeria) with the IFC/ World Bank Project Team in charge of preparing the “DOING BUSINESS REPORT”(2011, 2013,2014 and 2017 ), which benchmarks business regulations (inclusive of labour practices and employment conditions) in 189 economies worldwide. He also served as an Expert Contributor (Nigeria) for World Justice Project, which publishes the Global Rule of Law Index. In 2002, he was enlisted as a Panel Member of the Regional Centre for International Commercial Arbitration, Lagos, and in 2006, he was appointed Member of the Panel of Neutrals (Arbitration) by the Nigerian Communications Commission (NCC), for resolution of interconnectivity disputes among GSM Operators in Nigeria. In 2013, he was appointed by the Chief Justice of Nigeria as a Notary Public for Nigeria. While he was at the Bar, Justice Nelson Ogbuanya was an active member of the Nigerian Bar Association (NBA) Lagos Branch, where he served as Publicity Secretary (2009-2011) and 1st Vice- Chairman & Chairman, Human Rights Committee (2013-2015). He was a co-opted member of the NBA National Executive Committee (NBA-NEC) (2014-2016) and also served as the American Bar Association (Section of International Law) (ABA-SIL) Liaison to the Nigerian Bar Association & Country Representative for Nigeria (2013-2017). Among other scholarly publications, he is the Author of the Council of Legal Education approved Text Book: Essentials of Corporate Law Practice in Nigeria (2010, 2nd Ed.2014). Justice Ogbuanya is happily married and blessed with children. His Lordship is a Judge in the Port Harcourt Judicial Division of the Court.
Download Case Filing Form