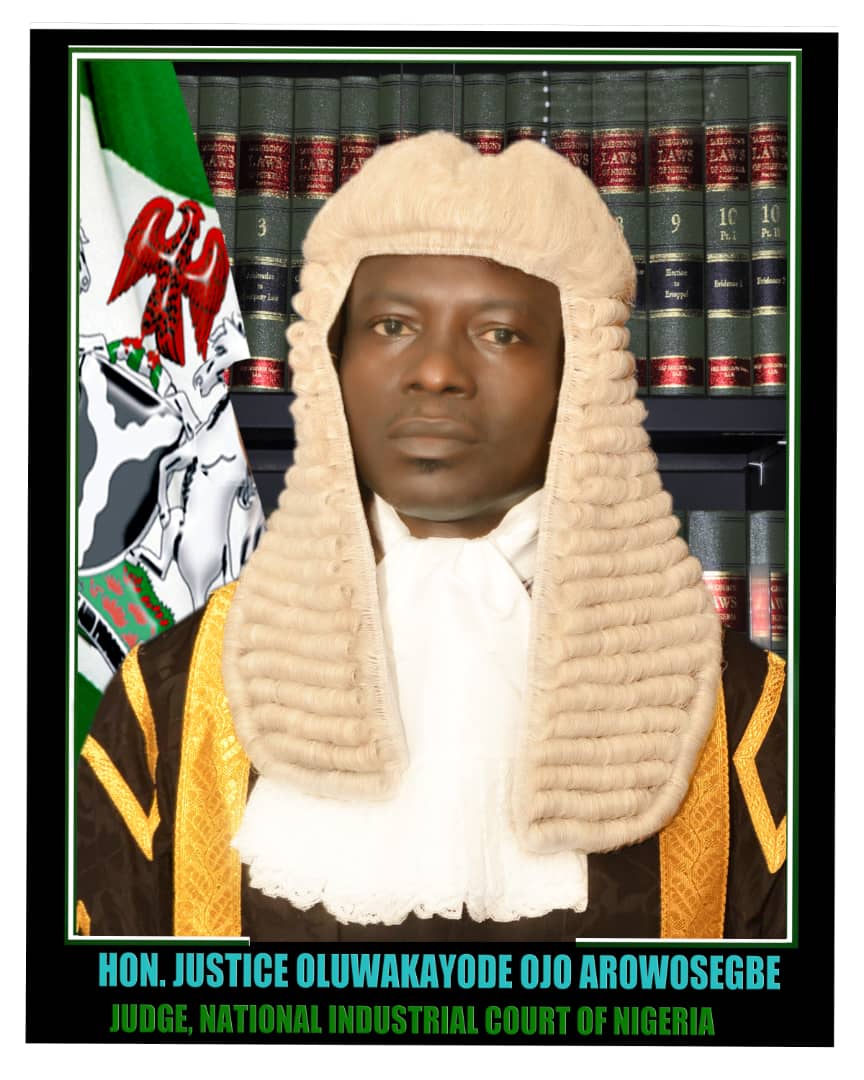 Honourable Justice
Oluwakayode Ojo Arowosegbe
Hon. Justice Oluwakayode Ojo AROWOSEGBE was appointed a judge of the National Industrial Court of Nigeria [NICN] on July 10, 2017. His Lordship hails from Arigidi-Akoko, Ondo State. He had his primary education at the Saint Paul’s Anglican Primary School, Arigidi-Akoko from 1974–1979, secondary education at Methodist High School, Owo [1979–1980] and Akoko Anglican Grammar School, Arigidi-Akoko [1980–1984]. His Lordship had BA (Hons) in English Studies from the then Ondo State University, Ado-Ekiti [now University of Ado-Ekiti] in 1990, LLB (Hons) and LLM Laws from the prestigious Obafemi Awolowo University, Ile-Ife in 1995 and 2008 respectively. His Lordship had BL (Hons) Laws from the Nigerian Law School, Lagos in 1996 and was subsequently called to the Nigerian Bar the same year. His Lordship began his legal career with the Ondo State Ministry of Justice in 1998 as Senior Legal Officer and rose to the post of Deputy-Director of Public Prosecutions before transferring His service to the NICN in 2011. His Lordship rose to the rank of Deputy Chief Registrar at NICN and was the Head of the Abuja Division from 2013–2017, and doubled as Research Assistant to the Hon. President of the NICN from 2011 until elevated to the Bench of the NICN in 2017. In this capacity, His Lordship drafted judgments and papers for vetting, and wrote legal advice. His Lordship is a prolific legal researcher and writer, with many publications in reputable local and international journals, experienced trial Counsel, Court Administrator, ADR practitioner and Chartered Mediator and Conciliator with ChMC certification from the ICMC, Nigeria. His Lordship has equally been an examiner on law and interviewer to the Federal Judicial Service Commission, and also had stints as part-time lecturer of Law in several institutions of higher learning. His Lordship was appointed the coordinator of the North-Central Zone for the ADR Centre of the NICN in 2015. His Lordship has undergone trainings in Court Administration, administration of Justice and ADR practice in some of the most prestigious institutions in the world. His Lordship has likewise had considerable cognate experience, trainings and qualifications in employment and labour relations with certifications from some of the most renowned institutions locally and abroad. His Lordship has also had solid experience in other areas of law, like: drafting legislations and contracts, and writing legal advice and opinions. His Lordship has also had quality experience in Election Petition Litigations, and has also served in several panels. His Lordship is highly computer-literate, works efficiently without supervision, and works well in team and under pressure. His Lordship is married with children. Justice Arowosegbe is the Presiding Judge, Enugu Judicial Division of the Court.
Download Case Filing Form