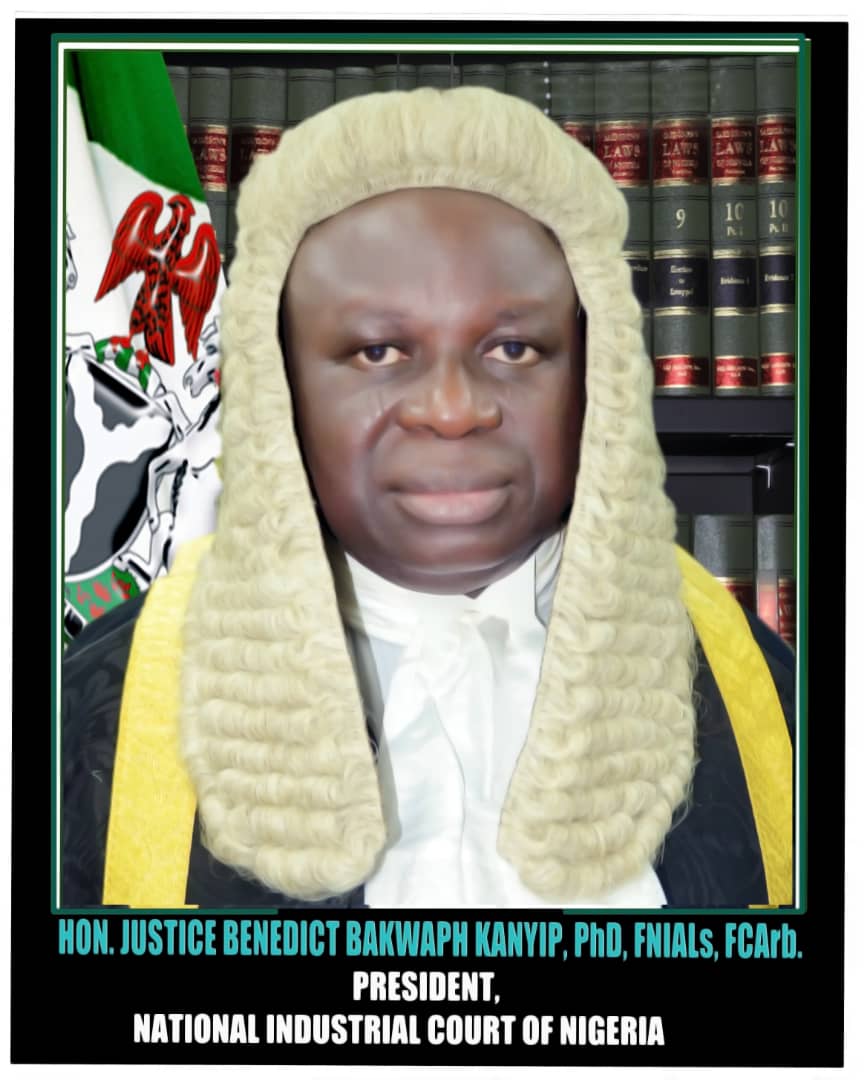 Hon. Justice
B.B. Kanyip, Phd, (FNIALS), OFR
Hon. Justice Kanyip was appointed a Judge of the National Industrial Court in 2000 for an initial period of four years although with eligibility for a renewal for a further term of four years. In June 2004, having completed the first term, his appointment for another term of four years was renewed, and he is now a tenured Judge of the Court. Hon. Justice Kanyip attended Ahmadu Bello University, Zaria, for his LLB, and the Nigerian Law School, Lagos, Nigeria for his BL. After the mandatory one-year national service, he took up a teaching appointment as a Lecturer at the Ahmadu Bello University, Zaria in 1987; and rose to the position of Lecturer II before leaving in 1992 for the National Commission for Colleges of Education as Legal Adviser in the rank of Principal Legal Officer. In 1995 he was appointed Senior Research Fellow at the Nigerian Institute of Advanced Legal Studies and rose through this appointment to the rank of Associate Research Professor of Law in 2000 when he joined the Court. His Lordship's is the author of numerous scholarly articles in the areas of consumer law, labour law, tax law and commercial law. He is the author of the book, Consumer Protection in Nigeria: Law, Theory and Policy (2005) and a joint author of the text: Elements of Commercial Law (1994). Hon. Justice Kanyip has had professional dealings and done consultancies for the Economic Community of West African States (ECOWAS), the International Labour Organisation (ILO) as well as the Federal Government of Nigeria on labour related areas. He is a member of the International Bar Association; Fellow, Chartered Institute of Taxation of Nigeria; Life Member and Deputy President II, Nigerian Society of International Law. His Lordship is a contributing editor of several academic law journals. Hon. Justice Kanyip is widely travelled. Hon. Justice Kanyip is the Presiding Judge of the Abuja Judicial Division of the National Industrial Court of Nigeria. Its is noteworthy that His Lordship, Hon. Justice B.B Kanyip was a worthy Lieutenant to the erstwhile president of the court, Hon. Justice B.A. Adejumo, OFR(Rtd), having been appointed on the bench of the NIC since 2000. Little wonder therefore, that the processes leading to His Lordship's confirmation as substantive president of the court and on the 13th of December 2019, His lordship Hon. Justice B.B. Kanyip was sworn in as the president of NICN.
Download Case Filing Form