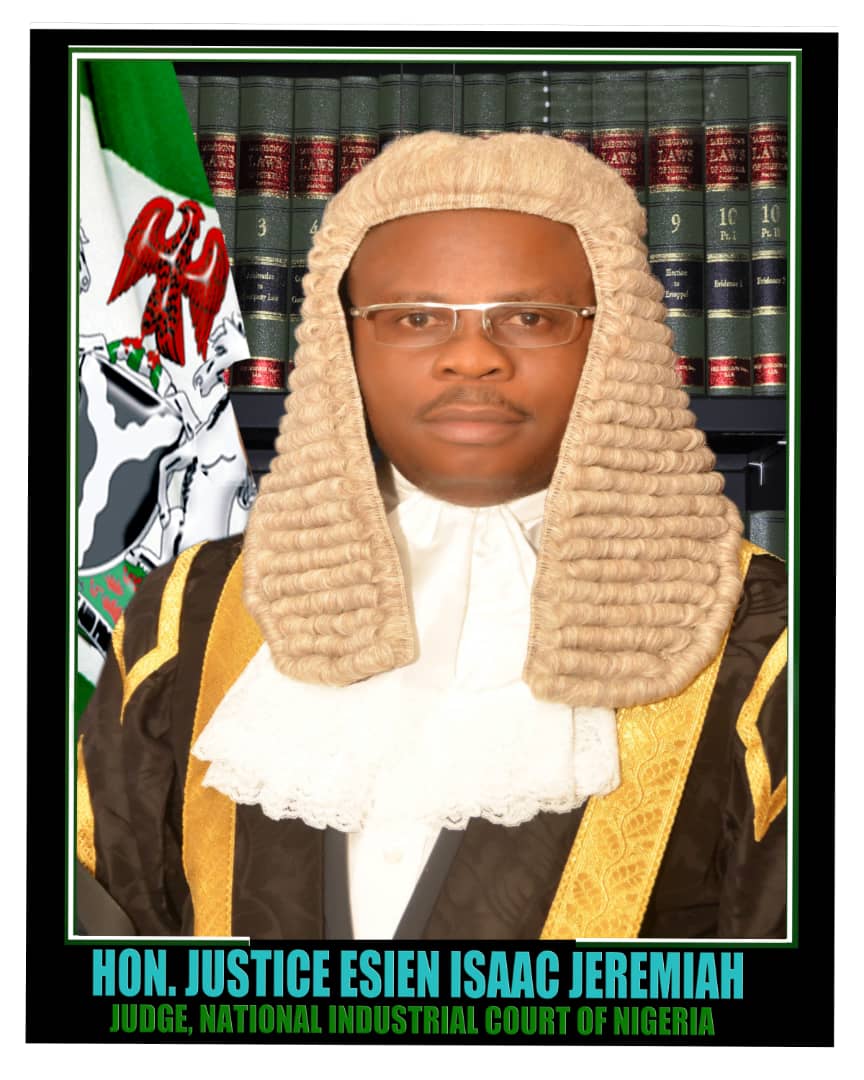 Honourable Justice
Isaac J. Essien (PhD)
Hon. Justice Isaac J. Essien (PhD)hails from Ikot Imoh in Nsit Ubium Local Government Council of the present Akwa Ibom State of Nigeria. He started his education at the Government Primary School Enwe Street Uyo, where he obtained his First School Leaving Certificate in 1982. He attended Eastern Secondary School Calabar and passed out with distinction in 1987. He gained admission into the Faculty of Law, University of Uyo in 1989 to pursue an undergraduate programme in law and graduated in 1994 with an LL. B. He proceeded to the Nigerian Law School in 1994 where he obtained his B.L (professional qualification) and was called to the Nigerian Bar on the 22nd day of March, 1995. He was posted to Jos, Plateau State for his Compulsory National Service (NYSC) in 1996. His passion for academics and continuous legal education grew while on national service. This influenced his enrolment into the LLM. (Master of Laws) Programme of the University of Jos in 1997 and graduated from the programme in 1998. To crown his academic pursuit, Justice Essien was admitted to pursue a Ph.D programme in the University of Jos. After 5 years of rigorous academic research work he was awarded the degree of Doctor of Philosophy of Law (Ph.D) by the Senate of the University of Jos in 2008. Justice Essien has taught at the faculty of law, University of Jos and also at the Faculty of Law University of Uyo as an adjunct visiting lecturer from 2008 to 2011. His last teaching post was Faculty of Law, Nasarawa State University. He rose through the ranks to a Senior Lecturer in 2011 and by October 2014 he was promoted to the rank of Assoc. Professor of Law. He has served as Head of Department of Business and Private Law in the Faculty of Law Nasarawa State University. Hon. Justice Essien is well published. He has a total of 31 publications to his credit some of which are in the area of labour and industrial relations law. He has been an astute legal practitioner who has conducted contested cases up to the Supreme Court of Nigeria before his appointment to the Federal Bench. He has presented many papers at conferences and was appointed Guest Lecturer Executive Course 32 NIPSS in 2010. He has also served as Legal Expert Budget Monitoring and Implementation to the National Assembly under the NASS/UNDP Support programme of the Federal Government of Nigeria between 2008 to 2010. He is married with children. A proud husband and father, His Lordship is in the Lagos Judicial Division of the Court.

WISHING YOU AND YOUR FAMILY A PROSPEROUS HAPPY NEW YEAR FROM ...

WISHING YOU AND YOUR FAMILY A PROSPEROUS HAPPY NEW YEAR FROM ...