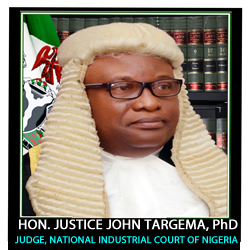 Honourable Justice
John I. Targema
Born on the 14th day of December, 1958 at the Dutch Reformed Church Mission Station Hospital at Mbaakon-Kunav in Vandeikya Local Government Area of Benue State, Nigeria, Justice Targema obtained the First School Leaving Certificate at the NKST Primary School, Mbaakon-Kunav in 1971. He proceeded to the W.M.Bristow Secondary School, Gboko, Benue State in 1973 for the West African School Certificate (WASC), which he obtained in 1977. He studied at the Murtala College of Arts, Science and Technology, Makurdi, Benue State between 1977 and 1979 for the IJMB and HSC. He read for his LL.B at the prestigious Ahmadu Bello University, Zaria between 1979 and 1982; and proceeded to the Nigerian Law School, Lagos for his post-graduate studies. He was called to the Nigerian Bar in 1984. Justice Targema obtained an LL.M in 1998,a PGDM in 2004 and PhD in Law in 2017, all at the University of Jos, Nigeria. After his National Youth Service Corps Scheme at the Plateau State Ministry of Justice in 1984, he worked under the Law Firm of Paul R. V. Belabo & Co. (Adzandeh Chambers) in Makurdi, Benue State between October 1984 and December 1986. He then established and run the Law Firm of John Targema & Co. ( Attorneys- at- Law) from January 1987 to February 1996. Justice Targema began his public service career in March 1996 as the Company Secretary/ Legal Adviser at the National Metallurgical Development Centre (NMDC) Jos – a Research and Development Parastatal under the Federal Ministry of Mines and Steel Development. He held this office until October 2006. He resumed at the National Industrial Court of Nigeria on November 1, 2006 as Deputy Chief Registrar; a position he held until he was appointed the Acting Chief Registrar of the Court on May 23, 2013. He was promoted to the substantive post of Chief Registrar with effect from 30th September, 2014 by the Federal Judicial Service Commission; and served in that capacity until 14th July, 2017 when he was sworn in as a Judge of the National Industrial Court of Nigeria. Justice Targema has authored some published works including: 1) The Law, Cases and Materials on Torts in Nigeria, 2) Basic Settled Principles in Industrial and Labour Law Jurisprudence in Nigeria, 3) Conceptual and Practical Analysis of Alternative Dispute Resolution (ADR) – A chapter contribution to Emerging Issues in Nigerian Law: A Collection of Essays in Honour of Hon. Justice B. A. Adejumo, OFR, President, National Industrial Court of Nigeria, Edited by A. Okoh Alubo, et al. He has also presented quite an impressive array of well researched academic papers at various workshops in Nigeria. He is also a Member of the Nigerian Bar Association (NBA), Institute of Chartered Mediators and Conciliators (ICMC), International Association for Court Administration (IACA), and the International Bar Association (IBA). He is widely travelled, and has been to the United States of America, United Kingdom (Great Britain), South Africa, Ghana, Ireland, Japan, Trinidad and Tobago, Italy, Austria, India, France, Barbados, and The Principality of Monaco. Justice Targema is married to Dr. (Mrs) Nguveren Comfort Targema, a Medical Parasitologist, Educationist and Development Consultant. They are bountifully blessed with children and grandchildren. His Lordship is the Presiding Judge of the Awka Judicial Division of the Court.
Download Case Filing Form