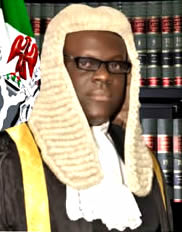 Honourable Justice
Ebeye David Eseimo Isele
Hon. Justice Isele attended the University of Benin between 1987 and 1991 and obtained his LLB (Hons). He was called to Nigerian Bar in 1992, after attending the Nigerian Law School for his BL. He was also at the University of Lagos from 2007 to 2008 for his LLM. He began his working career in 1994, at the law office of Chima Okafor & Co., in Lagos. He later joined the Bayelsa State Judiciary, and was Chief Magistrate, Court 3, Yenogoa prior to his judicial appointment at the National Industrial Court of Nigeria in May 2013. His Lordship is the Presiding Judge of the Kano Judicial Division of the Court.
Download Case Filing Form