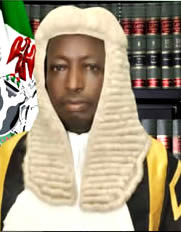 Late Honourable Justice 2013 - 2018
Lawal Mani
Justice Mani was born on 1st July, 1955 at Bungudu in Bungudu LGA of Zamfara State to the family of Mani Mohammed, father and Inno Matale Mohammed, mother, both deceased. He is married with children. He attended Bungudu Town Primary School from 1961 to 1967 for FSLC and Government Secondary School, Gusau from 1968 to 1972 for WASC. He was admitted into Ahmadu Bello University, Zaria in 1974 and graduated with B.Sc Political Science in 1977. He obtained LL.B from the same institution in 1991 and was called to Bar in 1992. He bagged his LL.M from his Alma Mater in the year 2000. Justice Mani performed his NYSC primary assignment at Governor Office, Ilorin in 1977/78 service year. He started his working career as Administrative Officer II in 1979 with the University of Sokoto. He joined Nigerian Agricultural and Cooperative Bank (NACB), Kaduna as Deputy Manager Administration and in 1981 was its Zonal Legal Officer in 1994. Between 1995 and 2001, he worked with Kaduna Textiles Limited as Personnel/Admin Manager. He joined the Federal Judicial Service Commission, Abuja in 2001 and has been its Director of Administration till his appointment as a Judge of the National Industrial Court of Nigeria. He has attended courses related to his field of work in the United Kingdom, Italy, Netherlands, Singapore and USA. He is a member of several professional bodies. 2013 - 2018
Download Case Filing Form