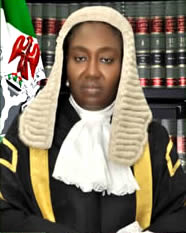 Honourable Justice
Rabi Haliru Gwandu
Hon. Justice Gwandu attended Usman Danfodio University, Sokoto for her Bachelor’s degree in Law from 1985 to 1990. She was called to the Nigerian Bar in 1991 after attending the Nigerian Law School at Lagos. She began her career with the Sokoto State Ministry of Justice in 1992. She rose through the ranks to become acting Deputy Director of Public Prosecution (DPP) between 1995 and 1997. Between 2010 and May 2013 she rose from the post of Assistant Director (Administration) to Head of administration and Human Resources management at the Nigerian Law Reform Commission, Abuja from where she was appointed a Judge of the National Industrial Court of Nigeria in 2013. His Lordship is a Judge of the Lagos Judicial Division.
Download Case Filing Form