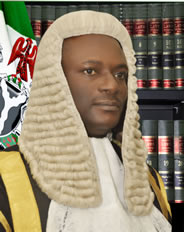 Honourable Justice 2013 - 2018
Peter Odo Lifu
Hon. Justice Lifu attended the University of Jos, Nigeria, where he obtained his LL.B, and was later called to the Nigerian Bar after successfully obtaining his BL from the Nigerian Law School. He further obtained an M.Sc. from the University of Ibadan, in Political Science in 2003, and also bagged an LL.M from the same University. He began his working career as a Pupil Counsel in the law office of Chief Matthew Adepoju and Co., Ibadan, where he learnt the rudiments of advocacy. He established the law office of Peter Lifu & Co. in 1992. Justice Lifu was appointed a Judge of the National Industrial Court in 2013. His lordship is currently on the bench of the Federal High Court of Nigeria.
Download Case Filing Form