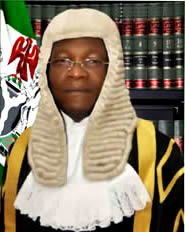 Honourable Justice
Kenneth Ikechukwu Amadi
Hon. Justice Amadi attended Imo State University, Okigwe, from 1985 to 1989 where he obtained his LLB; he thereafter proceeded to the Nigerian Law School, where he obtained his BL and was called to the Nigerian Bar in 1990. He further obtained his LLM in 2005 from his alma mata, the Imo State University. He started his working career in 1992 with the Law Office of Chuks Muoma and Associates, before starting his private law office, Ken Ike Amadi & Co., in 1995 at Aba. He was also a Lecturer at the Department of Law, Enugu State University of Science and Technology (ESUT), Agbani, Enugu, before his judicial appointment at the National Industrial Court of Nigeria in 2013. His Lordship is the Presiding Judge of the Jos Judicial Division.
Download Case Filing Form