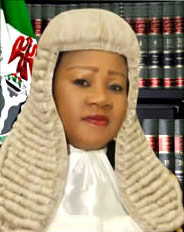 Honourable Justice
Oyejoju Oyebiola Oyewumi
Hon. Justice Oyewumi attended the University of Lagos, Akoka from 1986 to 1989 and obtained her LLB. She was called to the Nigerian Bar in 1990, and further obtained her LLM from the University of Ibadan in 2004. She also holds a Post-Graduate Diploma in Legislative Drafting and a Certificate in Industrial Relations both from the Nigerian Institute of Advanced Legal Studies Akoka, Lagos in 2000 and 2001 respectively. She started her working career in1992 with the law firm of Olujinmi, Akeredolu &Co., in Ibadan, as a Pupil Counsel. She later joined the FCT Judiciary Abuja, as Chief Magistrate I, and rose to become Deputy Chief Registrar II in 2007, a position she held until her appointment to the Bench of the National Industrial Court of Nigeria in 2013. Hon. Justice Oyewumi is the Presiding Judge of the Akure Judicial Division of the National Industrial Court of Nigeria.
Download Case Filing Form