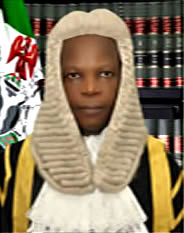 Honourable Justice
John Dele Peters
Hon. Justice Peters attended the prestigious Ahmadu Bello University, Zaria, from 1984 to 1987 for his LLB and was called to the Nigerian Bar in 1988. He obtained his LLM from University of Lagos between 1990 and 1991. He began his working career with a private law firm, Toyin Ajibogere and Associates, Ikeja, Lagos and handled several consultancies between 1989 to 1996. As an astute academic, he worked at the Nigerian Institute of Advanced Legal Studies, and the National Judicial Institute from 1996 to 2006. In 2007, he became the Director of Studies at the National Judicial Institute until his appointment as a Judge of the National Industrial Court of Nigeria. His Lordship is presently sitting at the Ibadan Judicial Division of the National Industrial Court of Nigeria.
Download Case Filing Form