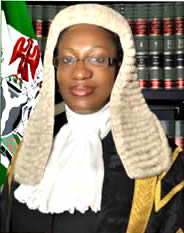 Honourable Justice
Olufunke Yemi Anuwe
Hon. Justice Anuwe attended Ahmadu Bello University Zaria in 1983 and obtained LLB (Hons) Degree in 1986. She was called to Bar in 1987. She also obtained an LLM from the University of Jos in 2006. She did her national youth service (NYSC), in the year 1987/88. She worked with Orifunmishe and Co., Suleja as a Junior Counsel, and later as Associate Partner, and Partner. She practiced at Suleja, Okene, and Abuja, and had extensive private practice experience in these places. She also worked as a Secretary to the ITF (Industrial Training Fund), from where she later joined the National Industrial Court, Abuja, as Assistant Chief Registrar, and was thereafter redeployed to the Jos Judicial Division as Head of Division. She held that post until her appointment as a Judge of National Industrial Court of Nigeria in May 2013. Hon. Justice Anuwe is in the Abuja Judicial Division of the court.
Download Case Filing Form