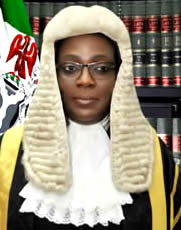 Honourable Justice
Osatohanmwen Ayodele Obaseki Osaghae
Hon. Justice Obaseki-Osaghae was appointed a Judge of the National Industrial Court in 2008. Before her elevation to the bench, she was actively engaged in legal practice between 1986 to 1992 and 2000 to 2008 in the law firms of Debo Akande & Co., Chief B.O. Olowofoyeku & Co., and H.B Abina & Co. She joined the services of Tafawa Balewa Square Management Board (TBSMB) as board Secretary/Legal Adviser, where she rose to the position of Assistant General Manager before she left the service. Her Lordship is in the Lagos Judicial Division of the Court.
Download Case Filing Form